Cooking for your Soldier

Growing up as an only child, my mother never asked me to cook, thus I never learned how. After I married, cooking became a requirement, especially as I was looking for a teaching job and my husband, Jim, was a second lieutenant working LONG hours. I made tacos the first time I cooked a meal for him in our apartment in Tacoma, WA. 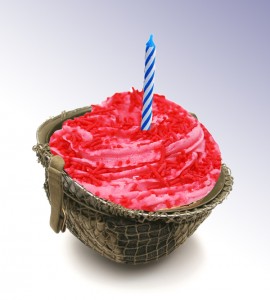 I worked hard on that meal, chopping the ingredients and cooking the meat just right. I burned the taco shells in the oven, of course, but I still felt quite proud of myself. While in the midst of creating my first mini feast, Jim came home. He brought a friend with him named Schmuck. Just what I needed, a guest at the first dinner. They sat down in the chairs in front of the television and promptly fell asleep. I felt guilty waking them for dinner, but I don’t really know why. They ate, went back to the TV, and fell asleep again. I remember thinking, “So this is what married life is going to be like?”

A feast for two

For Thanksgiving, all I knew was that turkeys were big, so I bought a 26 pound turkey for the two of us. Yup, I did. I got up at early light to start cooking, and it roasted all day. I made mashed potatoes from scratch, and served the cranberry sauce with whole cranberries. We ended up inviting our neighbors over to help us eat the turkey, a wise move. Jim was disappointed that I had not made the mashed potatoes the way his mom had, from a box. He also didn’t like whole cranberries in the sauce, points I pondered for future reference. I hadn’t made the dressing the way his mom did either, but I ended up a winning on this one in the long run. That turkey survived in our freezer for 2 1/2 years before we PCS’d and threw it out. Strange things happen during military moves.

Saved by the freezer

My cooking improved after that first year, but I followed recipes strictly for a while. That meant cooking for six when the recipe called for it. Jim grew up with two brothers and a sister–there were never left overs. Jim thought he had to finish everything I made for meals. He gained a quick 10 pounds before I figured it out and would freeze half of the dinner I made before he got home. Lesson learned!