Moving. That one word can set fear into anyone who has done it once, twice, or 20 times like most military families have. Knowing you only have six months before the truck arrives to pack up everything you own is bad enough, but a one-week notice is sometimes all you get. How many partially-used ketchup and mustard bottles have you given to (or inherited from) neighbors?

It is important to check expiration dates before you use any of these gifted treasures–sometimes it is extremely necessary, for a variety of reasons. When our friends were moving from Zweibrucken Germany to the States, we inherited a loaf of frozen bread dough. I baked it without looking at the expiration date. What resulted was a solid, heavy mass that was almost unbreakable and definitely unfit for human consumption. Since we were heading to the Rosengarten (a beautiful rose garden in the city), we elected to take our monster loaf to feed the ducks, thinking the water in the pond would have a good chance of softening the bread. 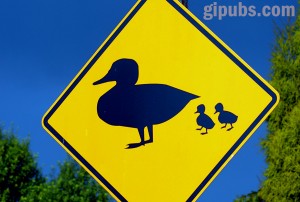 No ducks were harmed in this production.

While we were unloading the rest of the food, our three year old daughter saw the ducks approaching for food they knew we would provide. She hefted the loaf mightily to her shoulder yelling, “Heeeeey, Duuuucks!” and threw the entire loaf into their midst. Luckily the ducks were quicker than the cannonball loaf, and no ducks were harmed in this production. They tried their hardest to eat it, diving into the shallow water over and over again trying to break the crust, but there was still a whole loaf of bread in the pond, surrounded by many frustrated ducks. Even still, they were sure that their next dive would give them the crust of bread we had promised.

When we returned to our 900 square foot stairwell apartment (for two adults and two different sex children under four years old), I was able to trace the history of the frozen bread loaf. It had passed through the hands of 5 different military families. None of them wanted to dispose of the bread, but none of them had taken the time to cook it either.

I can only hope that, 23 years later, there is no loaf of bread sitting on the bottom of the lovely pond in the Rosengarten in Zweibrucken, Germany.

Moving. There is just no way to describe the challenges.

Do you have any wacky PCS stories? Tell us about your “Cannonball Loaves” in the comments below!