Why do awards get downgraded?

I just got my end of tour award back and it was downgraded from an ARCOM to an AAM. It's not fair. What can I do?

Awards are frequently downgraded for a number of reasons. Often, it is determined that the write up did not justify the award.

There’s not a lot you can do except to discuss the issue with the individual who submitted your award and ask them why it was downgraded.  Sometimes the award can be resubmitted, but  you will likely be stuck with it as-is unless significant information was left off of the original recommendation.

In some cases, the downgrading of an award may be a bad call on the part of leadership–but you should look at the situation from their perspective. They are making the best call they can given the information available to them. There are rarely any personal motives involved. 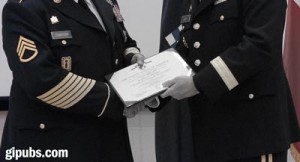 Most commanders want to reward their Soldier, but they also have to protect the value of the award.

Rather than being upset about the situation, you should consider yourself fortunate to receive an award. Some Soldiers walk away from a tour without an award. While Soldiers traditionally receive awards at the end of a tour of duty, there is no requirement for an award to be recommended. The fact that your chain of command recommended you should say enough about your service.

Nobody wants their award to be downgraded. Most of us have been there in the past. But there probably isn’t a conspiracy against you. No commanders sit on high with the intent to disapprove awards. Most want to reward their Soldiers, but they have to protect the value of the award. If everybody can ‘earn’ an award, what is it really worth?

Use this as a lesson learned. As you gain rank and responsibility, always do your best to get your Soldiers the awards they deserve! Some day, you may submit an award recommendation for your subordinate that gets downgraded.  At this point the shoe is on the other foot.

For more information about the awards process and for tons of great award examples, read The Writer: The comprehensive guide for writing awards.